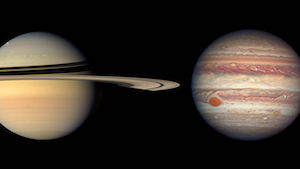 Up in the night sky, for a few nights in a row now, Jupiter and Saturn have been visible in close conjunction with the Moon. Tonight when you look up at the Moon, you might just see two twinkling ‘star-like’ lights just above and to the left of the Moon. These ‘star lights’ are Jupiter and Saturn!

Astrologically speaking, when Jupiter and Saturn appear to come together in a conjunction during their journeys through the zodiac, there are two sets of qualities that vie for importance in the world. The impulses of optimism, growth and reaching for the highest pinnacle, are brought head to head with an urgent need to address problems of mass injustice or even hidden discontentment that simmers under the surface. One planetary force serves through the expansion of light through knowledge and awareness, the other through mass movements and often the destruction of status quo through periods of uncertainty or even outbursts of anger and confusion.

Depending on the influence that these planets exert in our birth charts, there will be those who view the world through the lens of unbridled expansion – always with the hope for a new beginning. And to others, the pursuit of higher ideals will seem pointless until the larger, more basic problems of the world have been addressed. Some may feel torn within by both forces exerting their respective influences. An amalgamation of viewpoints are brought in to the limelight during these times, and their amplification creates a strong polarisation the world over.

When these two mighty forces come together, we are given a chance to hold both perspectives in our vision and find a way forward that builds a new kind of order, both on a mass level and even in terms of individual life choices and decisions. Most of the time we find ourselves swaying to the extremes, unable to find common ground between some very divergent viewpoints. Jupiter and Saturn may accentuate the polarities we experience, but they also give us a chance to think about the kind of reality we want to create. The feelings of anger, fear, depression and volatility tend to predominate when Jupiter traverses its sign of debility during the present days, and this is when we must pay particular attention to shining light upon knowledge, reason and intelligent ways of expression, perhaps more than ever before. There are many ways to bring about change, and this conjunction puts choices in front of us.

In the Hindu traditions, Ganesha symbolises that ‘pause’ before activity. Even the little mouse who sits by Ganesha pauses to seek his permission before eating the sweets on display, rather than running off with them. Around Ganesha, action comes from consideration. Developing that space in which consideration can happen meaningfully – this is the pursuit of the knowledge seeker and the artist.

The Mantra ‘Om Shri Ganeshaaya Namaha’ is a beautiful way to invoke Ganesha before embarking upon projects or work that may have an impact upon the world around us, and that may influence the way opinion is shaped. Ganesha is that great voice of wisdom who shows us what must be built through our effort and in what forms.

With love and peace,

<— Back to the main page